The Courts of Chaos

The Courts of Chaos 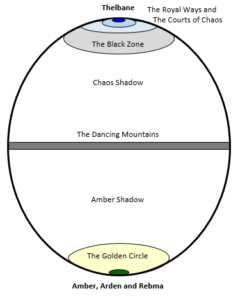 Thelbane is the original Abyss Rock on which Great Cornelius drew the Logrus. It is also the name of the glittering, needle-like palace where King Swayvill lives. The monarch of the Courts is known as the King of Thelbane.

The Courts are defined as the lands that comprise the area linked directly to the Rock of Thelbane, using pathways and fixed gates, i.e. without needing sorcery or the Logrus to get from one to the other. They extend for roughly fifteen rings of worlds around Thelbane itself. These comprise the worlds brought together from fragments of other lands found in the Abyss, the Fundamental lands which formed in the first fifty years after the Logrus was drawn (roughly the first five rings, and also known as the Royal Ways), and the Real worlds that formed between then and the point at which Great Cornelius gave himself to the Logrus (the next ten rings).

The establishments and homes of the Major Houses and many of the Minor ones are largely located within the Royal Ways. In the remainder of the Courts, and even within the Royal Ways, a considerable amount of the land continues to belong to the Crown. This is usually referred to as “Royal Land”.

Note: The definition of Royal Ways is different in Amber, as the Children of the Unicorn use the term to describe fixed routes between Shadows, for example in the Golden Circle. 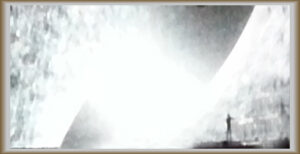 The Logrus is the constraining of the Chaos of the universe, and is what give the Nobles of the Courts of Chaos the ability to travel in Shadow – and bring Shadow to them. Logrus initiation is a pre-requisite for any form of Ways building.

The experience of initiating to the Logrus is unique to each candidate. It is common for the act of initiation to drive the candidate mad for some time afterwards, although this is less likely to recur if they traverse it again on another occasion. Recovery rates vary from person to person, and the madness can take different forms, from gibbering in a corner, to deeply paranoid, to a kind of creative madness where the candidate gains deep insights into life, the multiverse and everything. Every so often, a candidate never recovers, in which case they are returned to the care of their respective House.

Many have tried to describe the Logrus, or depict it in art, but there just aren’t enough dimensions to do so properly.  However, a selection of attempts at representing it are hung or displayed in various galleries around the Courts.

The opportunity to walk the Logrus is usually given as a reward for service to either the Crown of Thelbane, or the individual Houses, although children of Logrus users can also apply for permission directly to Archduke Suhuy, the Keeper of the Logrus.

Suhuy’s daughter, Tempe, is responsible for dealing with the regulation of time within the Royal Ways.

The Black Zone surrounds the ‘pole’ of the Courts of Chaos, and comprises the worlds that came into being between the time when Great Cornelius gave himself to the Logrus, and when Dworkin Barimen drew the Pattern. It is comprised of a myriad of Real and semi-Real worlds, strengthened by the Broken versions of the Logrus that are located out here, and which have varying degrees of allegiance or otherwise to the Courts itself, or individual Houses. The Logrus can unconditionally defeat the Pattern when summoned in the Black Zone. Lesser demons and humans both exist naturally in these worlds.

The worlds of the Black Zone vary considerably in size, from just a few miles across, to entire continents. Many of the larger worlds have well-developed histories and civilisatons of their own, and host their own institutions, such as mage colleges. One of the largest of these is Faraday, located on the edge of the Black Zone, where it meets Chaos Shadow.

The Black Zone worlds are connected by a system of naturally occuring pathways known as Serpent Lines, built around or radiating out from a number of “Nexus” worlds, which are often more Real than those which surround them, and sometimes have a fragment of the Logrus within them, or some other geographical oddity which contributes to their stability. Non-Nexus worlds are more fluid, sometimes changing their nature, or moving, or breaking up and forming multiple new worlds, or equally, consolidating together to form larger worlds. When this happens, the natural pathways adjust to the changes over the course of a few months.

Since the War between the Powers, activity in the region from those who are closer to Amber than Chaos, even though many of them also have Chaos Blood, has increased. This has not been appreciated by the residents of the Courts, and has caused hostility towards the Amber interlopers.

The Helgram Zócalo is located in the Black Zone, and Tierra Colinas is a modified Nexus point, where all the Serpent Lines that naturally join or pass it have been modified to converge on a single point: La Puerta, the only land route onto the world. It is about twenty Veils from where the worlds of the Black Zone give way to “normal” Shadow.

The Black Zone continues to be the bread basket of Chaos, and most nobles of both Major and Minor Houses have estates in the area.

The Borderlands refers to the band of five worlds either side of the Black Zone- Chaos Shadow Border. It is notable as an area where magic, as taught in the Courts or Shadow, becomes unreliable, with its place taken by another form of energy or power, known as the Ethyr, which is believed to be generated by the interaction between “Reality” and “Shadow”. Beyond this narrow band, magic reasserts itself as normal.

Chaos Shadow is considered to comprise those Shadows between the border of the Black Zone, and the Dancing Mountains. The Logrus has an advantage over the Pattern within Chaos Shadow, but this is not always as clear cut as is the case closer to Thelbane and in the Black Zone.

In the centre of Shadow is a band of ever-fluid worlds with constantly rollling Shadow storms, which appear to be the result of some kind of “interference pattern” between the Realm of Chaos and the Realm of Order. This is the Great Divide or, more colloquially, the Dancing Mountains. The extent of these worlds changes, sometimes expanding, sometimes contracting, but always forming a difficult barrier that needs to be crossed to pass from one Realm to the other. Moreover, despite their fluidity, the level of “Reality” here is similiar to the Black Zone/Golden Circle. Even the individual worlds are forever changing, with seasons coming and going minute to minute, day turning to night and back with no rhyme nor reason, terrains changing on a whim, and even atmospheres that vary in composition and primary elements.