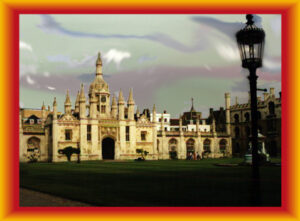 The Quad facing the Clock Tower

The Helgram Academy is situated within its own Ways, which can be reached from the Central Nexus of Helgramways. When first entering the Ways, you arrive in The Quad, an area of mixed lawns and paths with a statue of the Helgram lion in the middle, surrounded by well-appointed stone buildings. An 8ft-wide flagstone walkway goes all around the interior of the Quad. The occasional cat can be seen sunning itself on the stones.

Behind you as you come in, as if you’d just stepped through it, there is a wrought iron gateway, about twelve feet wide, also decorated with Helgram lions. This is the only break in the buildings of the Quad. Beyond it you can see countryside, but in reality it returns to the Central Nexus. The general look and feel of the place, including the climate, is of southern England or Northern France, and there is a single yellow sun in the sky.

The main building is styled after the Oxford or Cambridge colleges. Directly in front of you is the Clock Tower, which has an arch underneath it at ground level. The Quad Clock is the benchmark for time everywhere in the Ways. The rest of the building is made up of the Great Hall (in the East Wing, to your right as you come into the Quad), dormitories (for those students who board, which is c50%: the others either still live with their parents, or in one of the Pocket Ways off the Academy), the refectory, a small but well-equipped infirmary, and the classrooms, regular labs and workshops.

The arch under the clock tower leads through to the Academy gardens. You come out onto a raised terrace looking out over a formal garden, which extends roughly half a mile each direction around the Academy building, before ending in a beech hedge, about thirty feet high, beyond which look to be fields. Off to the left can be seen tennis courts, a swimming pool and a running track. The building this side is three storeys high, and seems to be of a different style of architecture to the Quad side.

The terrace runs for about a third of the length of the building, with a staircase at each end, and there is also an impressive staircase down to the Fountain Court. This is a 50ft square area, paved with multi-coloured flagstones and surrounded by a box hedge about 2ft high and 1ft wide. Seven pathways, spaced regularly around square, lead out into the gardens. Opposite the staircase, beside the hedge, is a small fountain mounted on an octagonal stone base, covered by a decorative iron gazebo, and topped with a white gemstone the size of a fist. This stone gives off a full-moon glow every night. 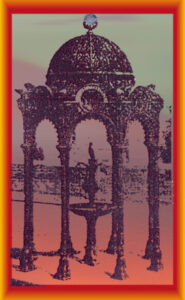 The Academy Ways is one of the more extensive sub-Ways attached to Helgramways proper, and comprises a large number of pocket Shadow, which allow the students to experience many different environments and tech levels, plus varying magic levels. These are reached from the Fountain Court.

The flagstones in the Court are of varying different shapes, sizes and colours, and depending on which single stone, of combination of stones you walk on, you can access specific areas of the Ways. One of the favourite tricks of the older students is to haze the younger ones, by giving them the wrong directions.

Because of the complexity of the Academy Ways, given the different kinds of training grounds offered for the students, there is a Wayskeeper in residence, who makes sure everything is where it should be, when it should be, and how it should be.