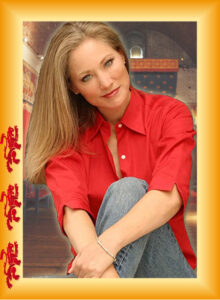 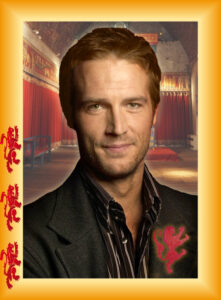 Ian is the eldest surviving son of Bleys of Amber. His mother is Swayvanna, daughter of Swayvill, the Royal connection giving him the Chaos title of Archduke as well as his Helgram title. He was brought up by his mother, and only became reacquainted with his father after the War Between the Powers. Even when he was still the Heir, Ian was a regular visitor Helgramways, and dealt with a lot of the senior day-to-day responsibilities within the House, as his father spent most of his time in Amber. During that time, Ian went out of his way to get to know the other members of the House.

He was installed as Grand Duke of Helgram a little under 30 Chaos years ago, in 14,995 ALC.

He is known to be a ritual magician of great skill, as well as wielding both the Logrus and the Pattern. He also has a reputation as an excellent healer.

Ian has a number of children and grandchildren, so unless some major catastrophe befalls them, the Grand Ducal line is secure for many centuries to come.

Ian married Marina after he reconnected with his father. She was brought up on the same world as he was, and their paths had crossed at various times as both of them were journalists of some repute. She is known to be a sorceress of some skill and, like her husband, has walked the Logrus. She is a grand-daughter of the late Brand of Amber.

Wolf is Ian’s eldest son, from a short-lived marriage many years before his father met Marina to a woman named Greta von Ansbach. Like his father, he is known to be a ritual magician and is also one of the stronger members of the House.

Eldest son of Duke Wolfram, Armand is the second in line to the Helgram title. A bright, cheerful young man, he has studied extensively with Warmistress Joan. His mother, Heidi, was a daughter of Fiona of Amber, although she died during the War Between the Powers.

Children of Ian and Marina

Other descendents of Grand Duke Ian

The children of the Grand Duke outside of the ruling line are styled “Earl” or “Countess”, unless they have earned another title for any reason

Other Descendents of Duke Wolfram

Other Members of the Ducal Line

John is Ian’s younger near-identical twin, although neither of them were aware of the other’s existence until comparatively recently. He was brought up by his father in the Realm of Avernus, and had a somewhat sheltered upbringing. Most of his time is spent in Amber, where he works as Bleys’s principal private secretary.

Clarissa is the eldest daughter of the late Grand Duke Graham Junior, and his wife Joan. She was brought up in the Courts, and was destined for a good political marriage within Chaos. However, she had other plans, and after initiating to the Logrus, she ran away into Shadow. Curiosity took her to the other end of the Multiverse, where she caught the eye of Oberon of Amber, who was looking for a new Queen after the death in childbirth of Faiella of Karm. They married (ironically thereby achieving the good political marriage she’d tried to avoid), and she gave birth to first Fiona and then Bleys. However, as the years passed, what started out as a passionate relationship, turned distinctly stormy.

She almost divorced her husband when she learned he had been having an affair with the Queen of Rebma. However, they eventually reconciled, which resulted in the birth of their third child, Brand. After he was born, however, things disintegrated sand their marriage ended in a nasty divorce.

After she fell from favour in Amber, Clarissa returned to her home in House Helgram, although she remained close to her three children, who Oberon had insisted on keeping in Amber, and worked to promote their fortunes. She encouraged them in their endeavours in the lead-up to the War Between the Powers, both for their benefit and to get some measure of revenge on her ex-husband. However, as the dust settled, after her younger son went somewhat off the rails, she became keen for her elder son to restore the honour of her line within Amber.

Bleys is the son of Clarissa Helgram and Oberon of House Dworkin-Barimen, and eldest grandson of the late-Grand Duke, Graham Helgram Junior. He was born and brought up as a Prince of Amber, although he developed and maintained links with his mother’s House in Chaos. After Clarissa fell from favour in Amber, and Rilga became Queen, he started developing his own interests, and became a less-frequent presence at his father’s court. He became Grand Duke Helgram on his grandfather’s death during the Patternfall War, in 14,984 ALC, and held the position until he handed it to his son in 14,995 ALC.

Bleys has two full siblings: Fiona, his elder sister, who is working with him in Amber; and the late Brand, his younger brother.

Back to the Helgram Main Page